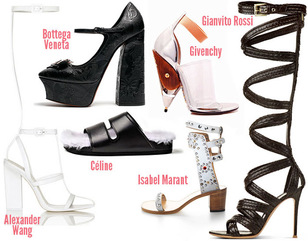 Some women drooled over gourmet food, Lidia thought,  while others lusted after jewellery or the latest fashion in clothes. For her it was
shoes

She stood in front of the shop window and dreamed. It was the only shop she knew that carried all the top fashion brands in one place.

Once, she remembered with a smile, she’d actually gone inside and almost turned and run out again when one of the women had asked if she needed
assistance.

“No,” she said, her mouth dry with desire, her hands sweaty with longing and her fingers itching to snatch just one shoe of its display and try it on.

She looked round, if there were other customers in the sop, Lidia couldn’t see them.

Had the assistance seen the longing in her eyes? She didn’t know, but when offered the chance to try on the Jimmy Choo shoes she let the dream override her sanity. With the encouragement of several members of staff, she’d gone on to try on several more. Every leading brand, she sighed, and smiled – and drooled, and kept going back to one pair that tugged at her heartstrings. The feel, the style, the straps dancing over the sole of the soul and twining up her calf, as soft as a lover’s touch, and the heels. Robert, her brother called them stilts and often wondered how any woman could even want to walk in them, let alone accomplish the skill.

Lidia had never entered the shop again, but occasionally a member of staff, if they saw her, would come out and have a chat.

But today was different. Today was a day for dreams to come true, thanks to her winning lottery ticket earlier in the week.

Not just a win, but one of those ‘it-only-ever-happens-to-other-people’ wins, that allowed her to pay off the mortgage on her flat, and to replace her own car and that of her parents. She’d tussled with her brother before he’d allow her to pay his student fees for the next four years.

“You can pay me back,” she'd promised, and smiled when he’d finally caved.

Now it was her turn.

Lidia  caught hold of the door handle, opened it and stepped inside…