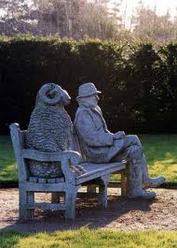 “Suppose we talk things through rationally?” Rose Kissal cast an irritated look at her companion. “You come here today and tell me you are leaving tomorrow, to take up a new job on the other side of the country, and you want me to go with you?”

“How long have you known about this  move?”

“I see, and in those weeks it never occurred to ask me in time for me to make the necessary arrangements for such a move?”

Sunlight sparkled on the spring-green  grass covering the valley hillsides. Dots of white, sheep, grazed peacefully. The hum of bees droned in the public flowerbed next to the solitary park bench. And unseen from her seat, friends went about their business, knowing her word was good and dependable.

And, she acknowledged, she wanted the same. For the first time since she first me Ronald, she realised she’d allowed his charming smile the glamour of his words and the emptiness of his promises lure her into thinking her really cared.

If he did, if he really wanted her to go with him, he’d have told of his new job, his intended move much
earlier.

It galled her to realise she’d hitched her dreams to an illusion. He hadn’t deceived her. Not really. She’d revelled in his kisses, his promises of forever, of a shiny new tomorrow, and allowed herself to be carried away on a carpet of her own delusional dreams.

And she admitted, as she looked at the man beside her, she’d enjoyed the envious sighs of her friends when they saw the two of them together.

Next to her, Ronald looked at his watch. A big shiny gold watch, she noticed.

Why had it taken a false invitation for the scales to fall away? That’s all Ronald was, a great big fat phoney, well not fat, she admitted, but still a phoney.

“Thank you, for the thought,” she  didn’t even try for a genuine smile, polite was sufficient for ‘goodbye’. “I happen to like my two-bit town, and my two-bit job, and most of all I love my honest-to-goodness-down-to-earth-hundred-bit friends.” Standing now, her hands fisted on her hips, she stepped back studied his shock. That, she noted with grim satisfaction, was genuine.

“You don’t mean that? You’ll be sorry.” Hard as bullets, he shot the accusation at her.

“Oh, but I do! Thanks to your belated invitation, I know moving anywhere with you would be a wrong
decision.”